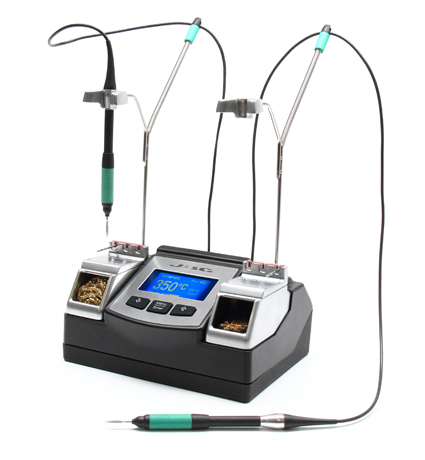 Following the success of the Nano Rework station, JBC has responded to requests from customers with the launch of the NANT Nano Soldering station.

THE HIGHEST PRECISION IN SOLDERING

The NANT Nano Soldering station incorporates the same control unit as the NAST station but it comes with two nano soldering irons instead of tweezers. It is specially indicated for high precision jobs requiring more than one nano soldering iron at the same time.

The nano soldering irons are the best solution for very small-sized SMD components such as 0201 chips or those that require the use of a microscope.

JBC's Nano tools are extremely light and comfortable and are noted for their short tip-to-grip distance. Despite their small size, they are able to provide up to 15W of power by using C105 cartridges.

The NANT Nano Soldering station also incorporates the latest developments of the NAST, since it has the same control unit. Click here to see the easy tool placement or the new cleaning & extraction set.