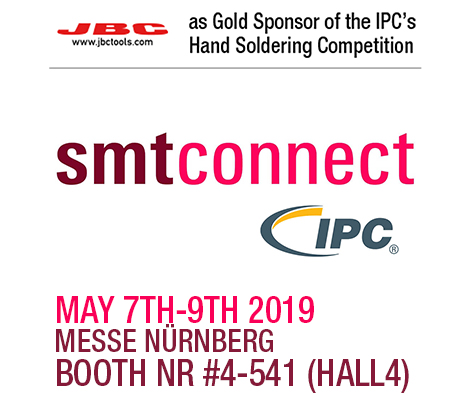 JBC is a Gold Sponsor of the IPC’s Hand Soldering Competition at SMTConnect, which will be held at the Nuremberg Messe.

JBC is a Gold Sponsor of the IPC’s Hand Soldering Competition at SMTConnect, which will be held at the Nuremberg Messe. This contest will recognize the best skills in hand soldering complex printed board assemblies. Over three days, participants will compete against each other to build a functional electronics assembly.

Assemblies will be judged on soldering in accordance with IPC-A-610F Class 3 criteria, the speed at which the assembly was produced and overall electrical functionality of the assembly. Master IPC trainers from IFTEC Institute will serve as judges.

JBC awards the winner
The IPC Hand Soldering Competition winner and the two runners-up will be presented with cash prizes: 1st place — €300; 2nd place — €200; 3rd place — €100. The winner will win a place in the competition of the best hand soldering technicians from around the world at the IPC World Championship at Productronica Munich, Germany in November 2019. In addition, JBC will award the best-of-the-best with a CD-BQ Compact Soldering Station for General Purposes.