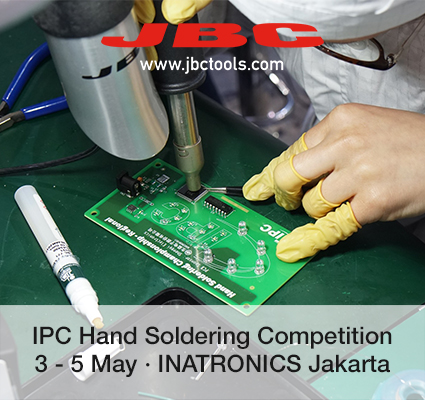 JBC is sponsoring the IPC Hand Soldering Competition in Indonesia

JBC is a Premier Sponsor of the IPC’s Hand Soldering Competition at INATRONICS 2018, which will be held at the Jakarta International Expo in Indonesia on May 3-5.


This contest will recognize the best skills in hand soldering complex printed board assemblies. Over three days, participants will compete against each other to build a functional electronics assembly within a 45-minute time limit.

Assemblies will be judged in accordance with IPC-A-610G Class 3 criteria, the speed at which the assembly was produced and overall electrical functionality of the assembly.

Cash awards will be given to the winner, who will also get the chance to compete at the IPC World Championship in San Diego, USA, in January 2019, and two runner-ups. JBC will award the best-of-the-best with a CD-2BE Compact Soldering station.